Please note: The following text cannot and should not replace advice from the patient's healthcare professional(s). Any person who experiences symptoms or feels that something may be wrong should seek individual, professional help for evaluation and/or treatment. This information is for guidance only and is not intended to provide individual medical advice.

Chronic pain is a very common symptom in the general population. The terms ‘acute’ and ‘chronic’ are used to describe the time that pain has been present, as opposed to the more common description of severity. ‘Acute’ means sudden and short-lived, whereas ‘chronic’ is persistent and lasting for more than three months. Both acute and chronic pain can have any degree of severity ranging from mild to excruciatingly disabling.

The distribution of pain is defined as ‘widespread’ if it occurs at sites on both sides of the body AND both above and below the waist AND in the spinal region. The term ‘regional’ defines pain confined to specific areas, e.g. one arm, or one arm and one leg on the same side of the body.

Together the above terms describe ‘chronic widespread pain’ (CWP) and ‘chronic regional pain’ (CRP). From large surveys, we know that CWP is found in approximately 11% and CRP 25% of the population. It is thought that most CWP arises from soft tissues, such as muscles and tendons, that otherwise appear to be normal. Far from normal, however, is the experience of poor health and reduced quality of life among sufferers of chronic pain.

When a particular pattern to the distribution and nature of the pain is recognised the diagnosis of fibromyalgia is made. Fibromyalgia (FM) is probably the most common diagnosis given to people with CWP. However Ehlers-Danlos syndrome (EDS) (particularly hypermobile Ehlers-Danlos syndrome (hEDS) and the related hypermobility spectrum disorders (HSD)) can also present with a similar picture. Equally, hEDS/HSD can present with recurring acute or persistent chronic injury to a few hypermobile joints giving rise to CRP.

Both FM and hEDS/HSD are common conditions. It is not surprising therefore that they may occur together by chance in an individual. However, several small studies and commentaries also suggest that they may be associated with each other by potentially sharing similar mechanisms that lead to pain. Whether by chance or whether associated, it is important that your doctor does not ignore hEDS/HSD just because FM is present. Aside from the fact that hEDS/HSD has other problems not seen in FM that could be missed, the physical therapies used to help FM might cause harm if not adapted for the hypermobile individual.

The definition of FM was formed in the late 1980s by the American College of Rheumatology. Prior to this the symptoms were recognized as ‘fibrositis’. The term ‘fibromyalgia’ is more descriptive of the fibrous tissue (fibro) and muscle (myo) pain (algia). FM is usually explained as a condition in which the muscles become tense, tender and tight due to lack of relaxation. Inﬂammation (itis) is not a feature.

The 1990 American College of Rheumatology criteria for making a diagnosis of FM are:

The sites of tender points are shown in the figure below: 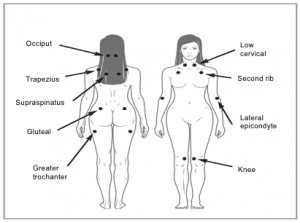 However, recently it was proposed that FM might be diagnosed using a symptom checklist without undertaking an examination for the tender points. This proposal has been controversial, not least because the symptoms can be found in other conditions such as hEDS/HSD, and it should always be the case that someone with pain and fatigue should be examined carefully and not assumed to have FM.

The cause of FM is not known. There are no abnormal blood tests, scans, biopsy tests or other investigations to support the diagnosis, although muscle pain may be associated with a low vitamin D level, which should be corrected. Like hEDS/HSD, FM is associated with headache, fatigue, poor sleep pattern, restlessness, bowel disturbance (e.g. irritable bowel syndrome) and autonomic disturbances of heart rhythm and blood pressure.

There is no cure for FM. Given the various symptoms aside from pain, it is likely also that no one treatment is sufficient. Treatment is aimed at reducing symptoms as much as possible. A number of treatments have been described with varied success; not all treatments help in all cases and often people present with very different circumstances and symptoms requiring an individual approach, not unlike the principles applied to hEDS/HSD. In 2007 a team of experts looked at the research evidence for the effectiveness of different treatments. Their conclusions were published in a guideline called the ‘EULAR Evidence-Based Recommendations for the Management of Fibromyalgia Syndrome’.

Aerobic activities such as walking, cycling and swimming are thought to be the best form of exercise to improve symptoms. Gradual build-up over a period of several months, leading to exercising 4 to 5 times a week for at least 20 to 30 minutes at a time is recommended.

Physiotherapists can support you with exercise advice, adjustments and assessment of effectiveness. This should include advice on lifestyle, relaxation and ‘pacing’. When you are hypermobile your therapy assessment may need to include:

Exercising for 20-30 minutes in any form of heated pool (hydrotherapy) – whether it be a specific therapy unit or local heated swimming pool – may help some people.

CBT is one type of psychotherapy (‘talking treatment’) undertaken by clinical psychologists and can be of value in managing FM. CBT tends to deal with the way current thoughts and behaviours are affecting a person. It is a problem-focused and practical therapy aimed at taking control of and easing pain, fatigue, mood and anxieties that interfere with day-to-day living. It is a valuable addition to exercise, other clinical psychology, physiotherapy, and drug treatments.

Some people find therapies such as massage, aromatherapy and acupuncture effective. There is little research evidence upon which to base advice for the use of these treatments and they might work in part by helping relaxation.

It should be noted that whilst clinical trials of the following painkillers have been undertaken in FM, they have not been undertaken in hEDS/HSD. The most commonly-used painkillers include antidepressants (for both pain control (e.g. milnacipram and low-dose amitriptyline) and low mood (e.g. duloxetine, ﬂuoxetine, sertraline and venlafaxine)) and anticonvulsant drugs (e.g. pregabalin and gabapentin). Tramadol in combination with paracetamol appears to have similar benefit to the antidepressants in treating FM. It is unwise to take strong opiate drugs such as morphine long-term because of the risk of dependency and side-effects. Also, opioids often do not work other than in relieving episodes of acute pain.

For very short periods of time, for example a week, a doctor may recommend a muscle relaxant such as a benzodiazepine (e.g. temazepam or diazepam) if spasm is severe. These may also reduce anxiety. Their use as sedatives to help correct poor sleep pattern may work for a short period but the long-term effect on FM overall is very disappointing. Therefore sedatives are not recommended, furthermore there is the same concern of dependency as with opiate painkillers.

Fatigue is a common and disabling finding in many musculoskeletal conditions including FM, hEDS and HSD. It is important to exclude other causes of fatigue such as anaemia, endocrine abnormalities like an underactive thyroid (hypothyroidism), chronic infections and deteriorating heart, lung, liver or kidney function. In the vast majority of cases of FM and hEDS/HSD however, fatigue is simply a feature of the pain syndrome.

It is more than the typical tiredness one associates with exercise or a busy day. It is often an overwhelming lack of energy after even minimal activity. In children and adolescents poor concentration may lead to problems with schooling, especially if the issue goes unrecognized or unsupported. The inability to control fatigue may come across to others as lazy, antisocial, or perhaps even depressed.

Many individuals report intolerance of the cold, dizziness, a fear of blackouts, poor concentration and note that they cannot stand for too long without aggravating their fatigue. This may be due to autonomic disturbances of the heart and blood pressure (see EDS UK’s article ‘Autonomic Dysfunction’).

There is very little evidence to support the use of the various forms of therapy available for fatigue. In FM and hEDS/HSD, analgesics and antidepressants used to control pain may help relieve fatigue indirectly. In the same way, control of autonomic disturbances of the heart and blood pressure may help. Lifestyle changes including pacing, changing sleep pattern and exercise may be helpful too, as may behavioural therapy.

While there is limited evidence supporting the use of nutritional supplements, the commonly recommended supplements in the management of chronic fatigue syndrome (and therefore potentially of fatigue in FM and hEDS/HSD) include carnitine, co-enzyme Q10 and 5-HTP. Such agents are considered to be effective in boosting the immune system, raising energy levels, and improving cognitive functioning.

With all these supplements, it is important to remember the potential for interactions with medication which may not be known, that there is often limited or no data on use in pregnancy and lactation, and that there are no specific dosage recommendations for FM or hEDS/HSD.