I have always loved horses, from the moment I experienced my first ride on a donkey as a baby I was hooked. I look back at old home video footage my parents took and now realise that lens captured moments which were destined to be a part of my future. My upbringing was at a time when home movie making was the latest craze and I was equally in wonder of this magical new toy.  It was not too long before these cumbersome video cameras became ‘handheld’ and I was desperate to get my tiny hands on the new family gadget! This was the beginning of a unison of my two major passions in life, film making and riding. As a child, many rainy days were spent editing the footage I had shot at my local riding centre and later on filming my own horses and exploits in showjumping. These formative years have taken me down a path that I am still following today.

Alongside all of these early days, I was dealing with symptoms of an invisible illness. As a baby I was always unwell and had problems hearing and underwent operations to help me hear better. This was just the beginning of my health roller coaster ride and it wasn’t too long before my health impacted on every angle of my life.  Presenting first as ‘stroke- like’ symptoms whilst still at junior school, resulting in brain scans, paramedic and A&E visits, these strange symptoms were later diagnosed as a classic presentation of EDS and related comorbidities.

Whilst my legs are often too weak to walk, I have found freedom on the back of a horse

By the age of 12, attending school was proving near impossible, every time I appeared to recover a new episode would begin. The only option was to be home educated, and even then my tutor would arrive and leave as he could see my total exhaustion.

I felt so isolated and invisible as I lost all remnants of a once normal life to chronic illness. However, I found a way to hold on to the two passions in my life. Between hospital visits we found a way to still compete in showjumping and capture those precious moments on film.

As far too many EDS sufferers know, the road to eventual diagnosis is long and involves endless hospital and medical visits and for many it never happens due to lack of awareness.  The suffering and worry for family is truly exhausting and saddening. My symptoms today are still invisible to others, despite the fact I live on a liquid diet, am in constant pain with my EDS and other associated comorbidities. I often need walking aids and on bad days a wheelchair.

Circumstance severed my dream of showjumping as a child. Whilst on the precipice of gaining my diagnosis, my beloved horse became ill. No matter how many times I sat outside her stable at night, or how many times I chose to compromise my own treatment for hers, none of us could save her. I was broken in every way. It was a time in my life when everything started to fade away. My health, my education, my future, and my best friend too. I was left only with chronic illness. So I resolved to make a change.

This led to my first film ‘The Wall of Lyon’ which is based on the universe of the novel. To date, the film and music has a combined total of 40+ industry awards. Screening at Cannes Court Métrage, I even had the chance to walk the world-famous red carpet, it was surreal!  My local paper ran the headline “Ashleigh Storms Cannes”, really? me? Invisible me?

Ashleigh at Cannes for her film “The Wall of Lyon”

My birthday came around and I was asked what I would like by my family.  I’ve never been one for things, I much prefer experiences. So, I said, “I want to ride again, just a quiet trek” because I was done with denying myself happiness if my illness was to do it too. I knew my mum would be terrified at the prospect as she instinctively knew it would lead to me showjumping again. I took my very first showjump with my local RDA [Riding for the Disabled Association] and when I returned home, my mother checked my usually low blood pressure and she could not deny that my blood pressure was better than it had been for years and I was happier than I could remember. It was then she says that she understood and would fully support me despite her intense motherly instincts to stop me, it was her fear not mine. I am truly blessed with loving parents and they were there when I competed and won class champion at my very first competition back at the RDA’s 50th Anniversary with Princess Anne in attendance. I’ve regained my freedom on the back of a horse.

The idea came to me to combine my other love, film making, to document my efforts to get back in the saddle and shine a light on “invisible illness” . My social media accounts depicted an ‘unreal’ version of myself, the celebrity parties, the glamour, the front I was putting up to the world for fear of being bullied again, but not the reality of my life with illness. Something needed to changed. I was tired of hiding.

I picked up a camera, and my new film about tackling life changing illness to get a new sport into the Paralympics was born. Only one name would do, ‘The Dark Horse’. 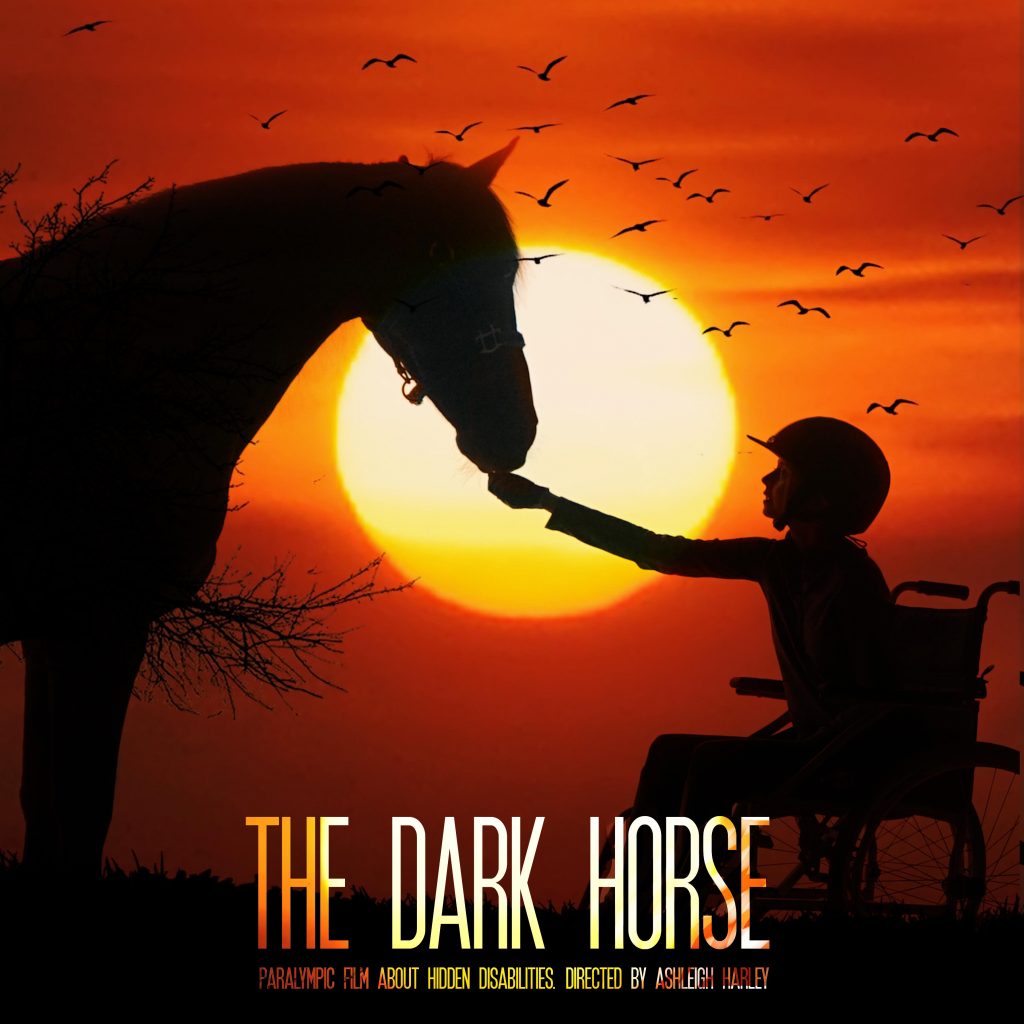 The Dark Horse – a new film by Ashleigh

So far for the film, we have interviewed the International Paralympic Committee, the world governing body the Fédération Équestre Internationale (the FEI), British Showjumping, young inspiring athletes and partnered with a charity that supports youth with invisible illness.  As part of the film I’ve ridden at the Horse of The Year Show and had the incredible honour of jumping the late Tim Stockdale’s champion horse, Kalico Bay. The Oscar-winning production company Slick Films are even coming on board to collaborate as executive producers!

I’m hopeful the film will find a stronger and louder voice for the unheard. One voice can become many voices, until eventually the message is clear: we all have something to offer, we all matter, we can all make our dreams happen regardless of adversity.

The current coronavirus pandemic had meant that filming is paused for now, but despite this I’m still busy with planning and post-production plans and will be launching a crowdfunding campaign to help with costs to get the film over the finish line.

I hope you will follow the story of making this film and reach out to us!